Last I left you, I had gone up and down Ella Rock, a sweaty steep climb, and as a glutton for punishment decided to do another hike the following day. Little Adam’s peak is much more user-friendly – just a short jaunt up the road and some stairs at the end leading to the Buddha at the top. In fact, since it had been several days since my last run, I decided to do the stairs. . . a few times. I was a sweaty mess after my little workout, but the views were worth it. 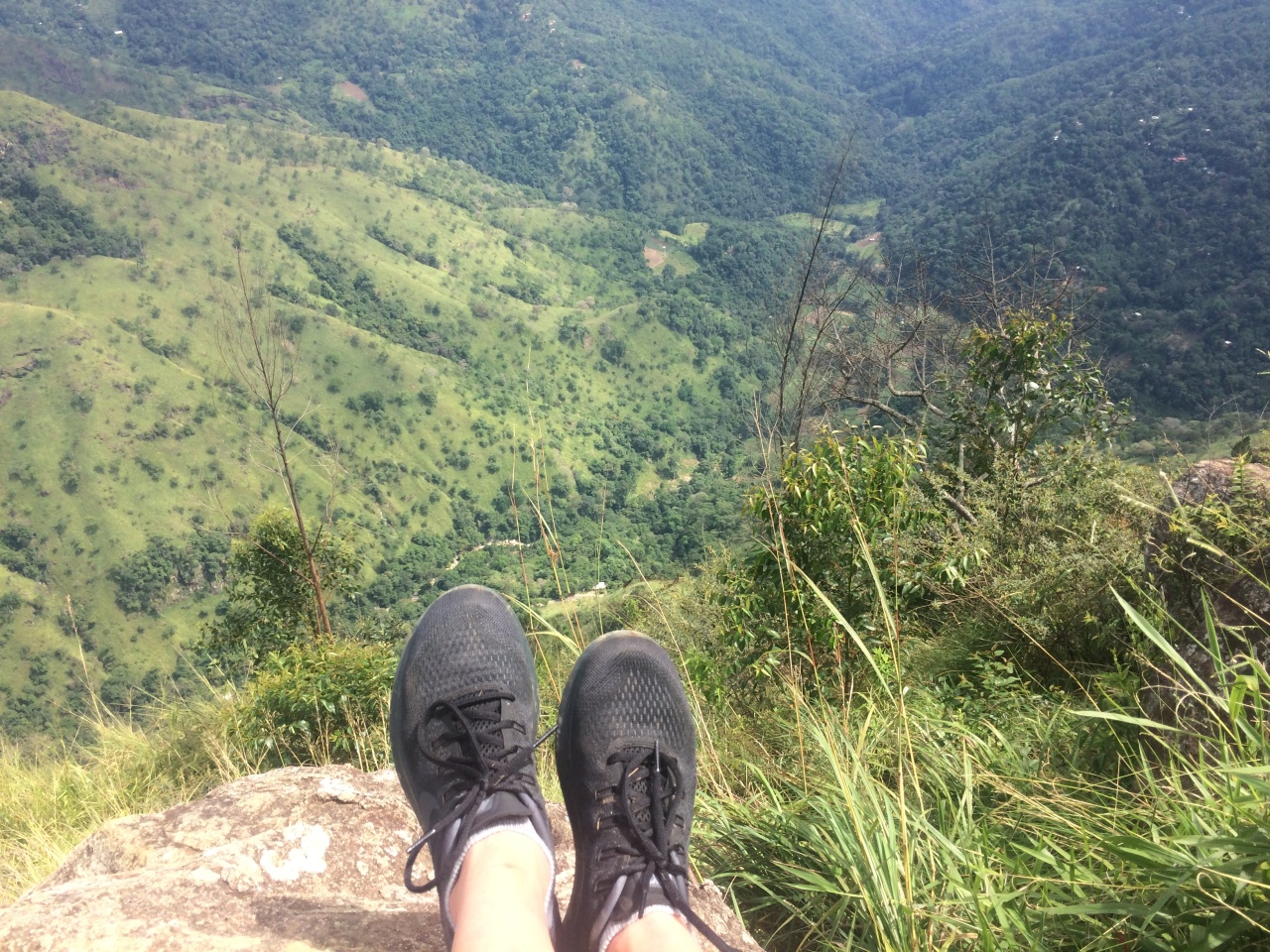 Ella town itself is quite small and easily explored within a few hours. Mostly souvenir shops, hotels, and restaurants, it’s a good spot to relax with a drink and a book. I found an icy cold green smoothie at Home Town Restaurant to quench my thirst after the climb, then slowly wandered back to my chalet for another afternoon nap away from the hot sun. Dinner was quickly becoming a predictable affair too, in the best way. The traditional Sri Lankan meal, rice surrounded by several different meat or vegetable curries, chutneys, and pappadums, was right up my alley. Similar to how I felt when I went to Nepal, I could eat the local food forever and be happy as a clam.

Though Sri Lanka may look small on a map, my plan for the trip was really only covering the Southwest portion of the island. The next morning, I shared a taxi with two fellow travellers to Yala National Park. We had met while hiking the previous day and discovered our itineraries were almost identical. While taking a 2-hour long taxi might sound insane, taxis here are cheap as chips – we paid about $10 each for the ride.

Yala National Park is down on the plains. Away from the elevation in Ella, the heat and humidity was even more oppressive, and giant tropical bugs are waiting to carry you away at a moment’s notice. The driver dropped me at the utterly charming W at Yala hotel, where I spent the afternoon reading and relaxing in the lovely sitting room, open to the breeze and palm trees. 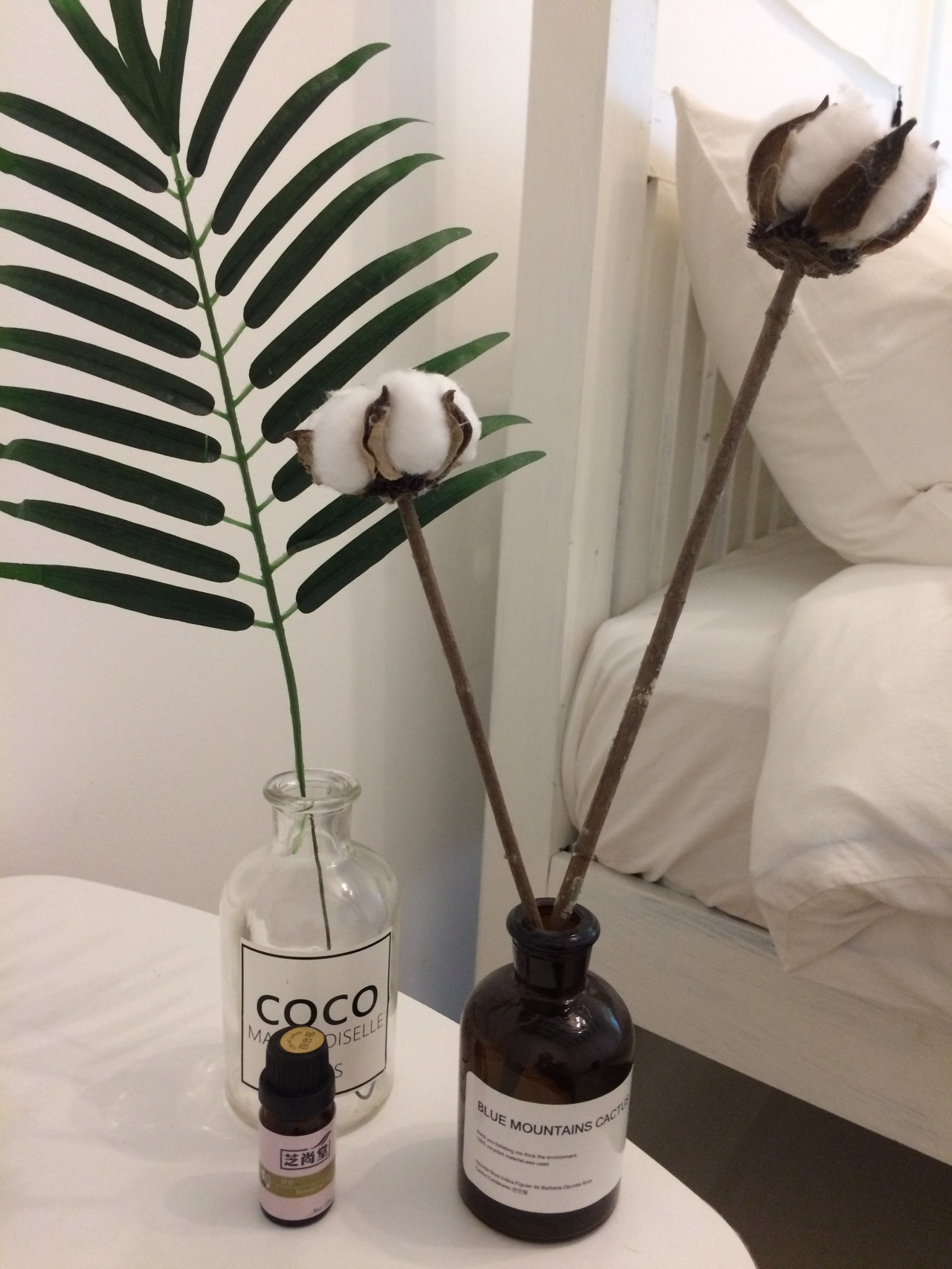 That evening, based on a recommendation from the hotel, I grabbed a tuktuk to a fish restaurant, and chose the tuna curry – freshly caught tuna loin, coconut milk, onions, carrots, and rich spices, served with a side of rice. Along with a fresh squeezed lime juice, it was just the ticket for a hot sweaty night.

I was picked up in the early morning light by my driver and his Jeep. Many different companies offer safari tours at Yala, and something around $50 gets you a hotel pickup, entrance fees, a 5-6 hour safari in the park, water, and drop-off back at the hotel. No private vehicles are allowed in the park and you’re not allowed to enter without a guide. They don’t want hapless tourists being eaten by leopards.

The park is populated with various creatures – elephants, bison, deer, monkeys, crocodiles, and the elusive leopards. The latter is the animal everyone wants to see, but sitings are rare. Leopards are shy little (big) guys, and even the slightest rumble of a tire is enough for them to retreat to the bushes.

My jeep snakes its way through the park. Our first siting is a young elephant, according to my guide, somewhere between 5-7 years old. He’s fairly unconcerned with us, happily chomping on some leaves. Next, a croc slithers across the pathway directly in front of us, slipping into the water on the other side and gliding across, with those foreboding eyes glaring just above the surface of the water. Bison are everywhere – bathing in the mud or wandering through the grass. 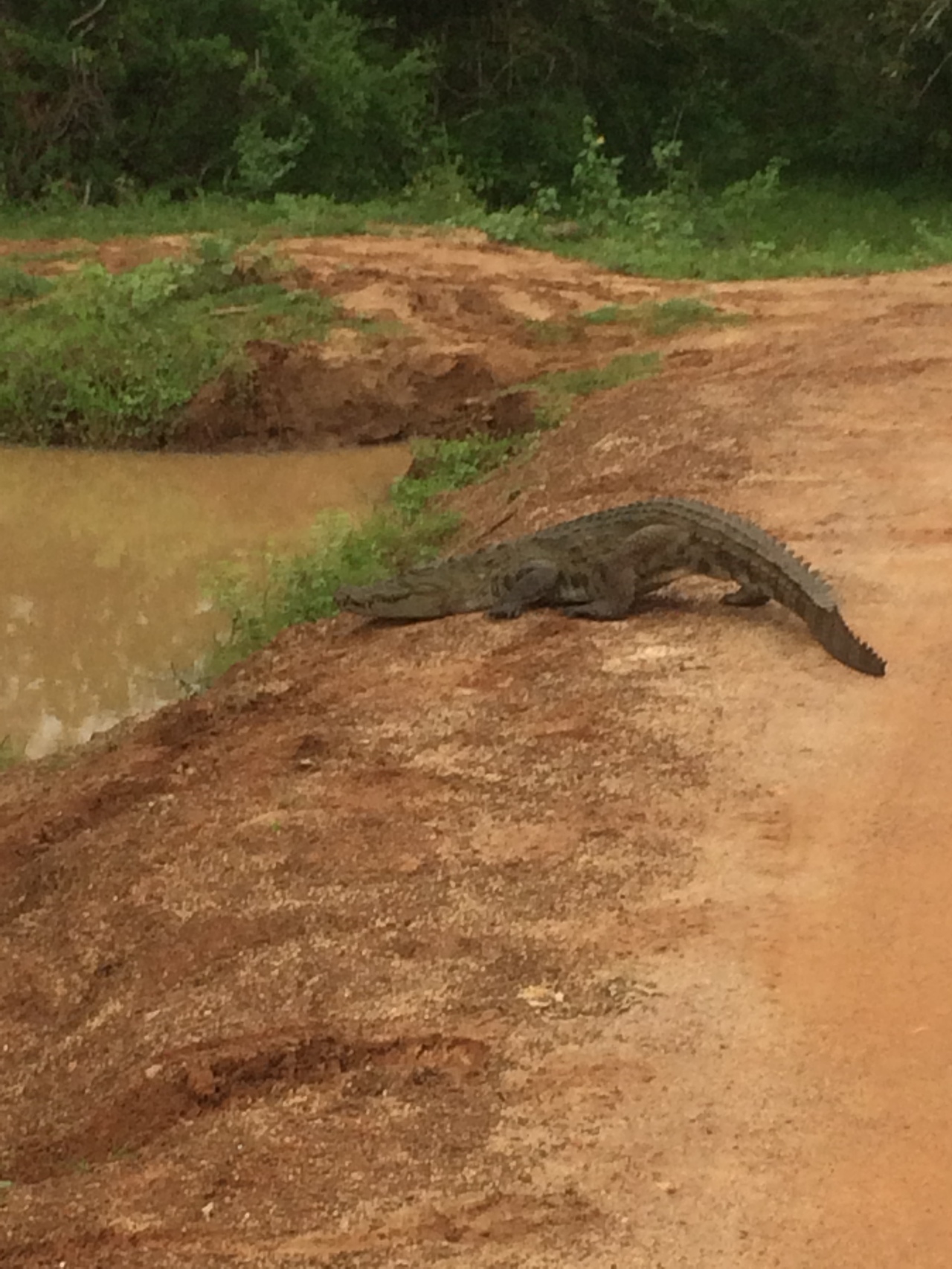 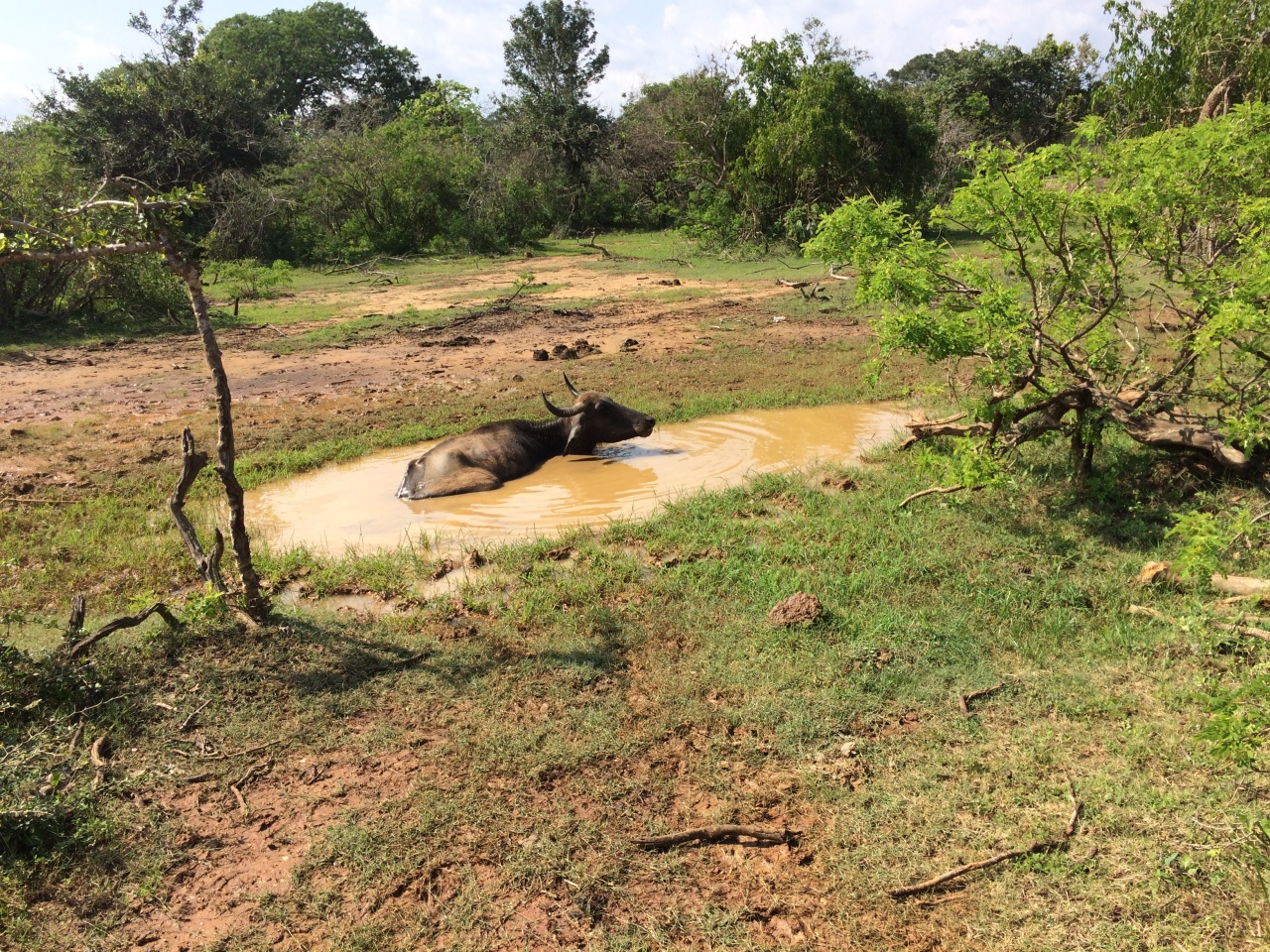 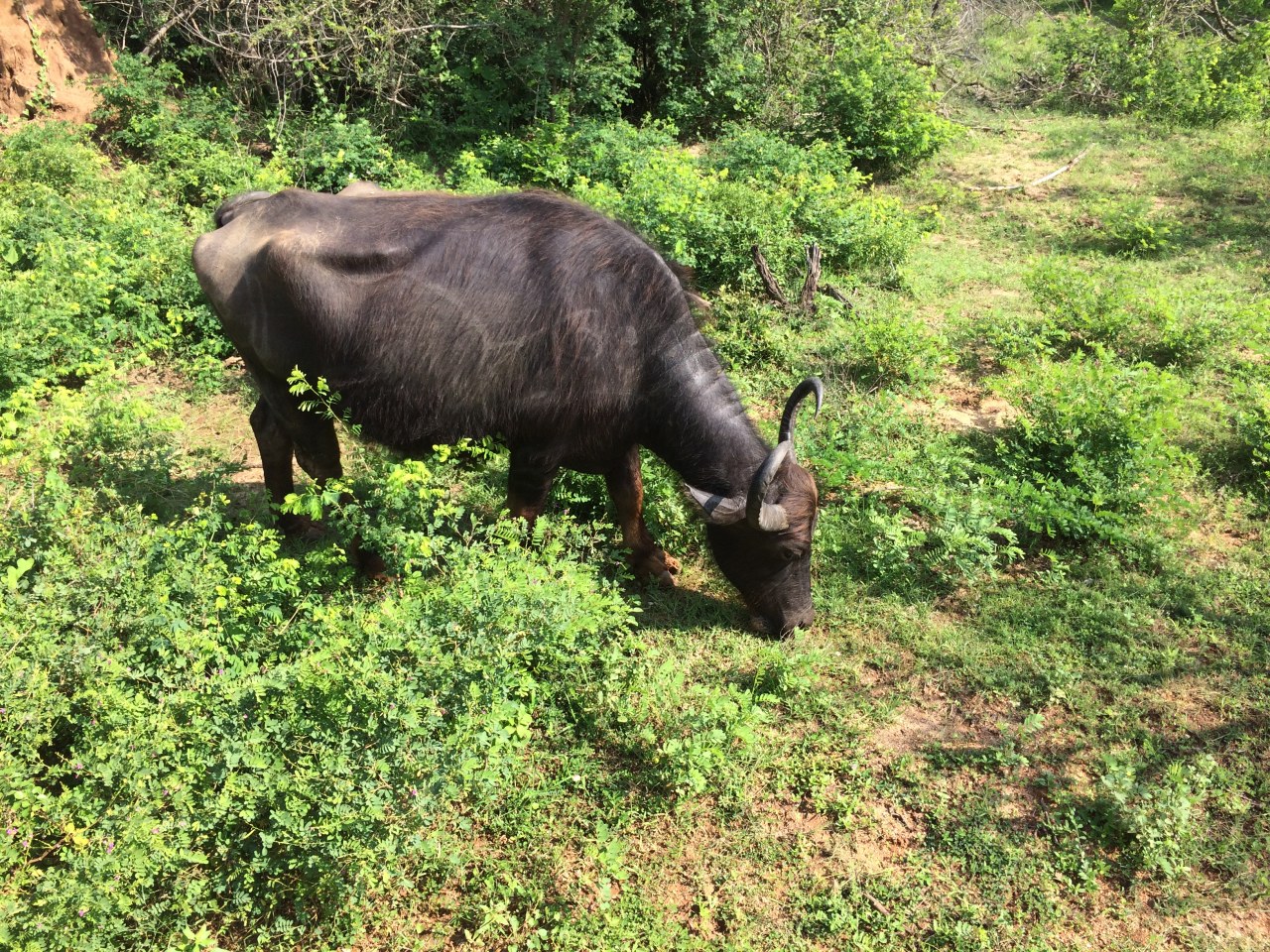 We drive to the far edge of the park, where the greenery meets the sea. I’m met with gorgeous views of the beach, along with a memorial for victims of a tsunami in 2010. The beaches in Sri Lanka are truly astounding. 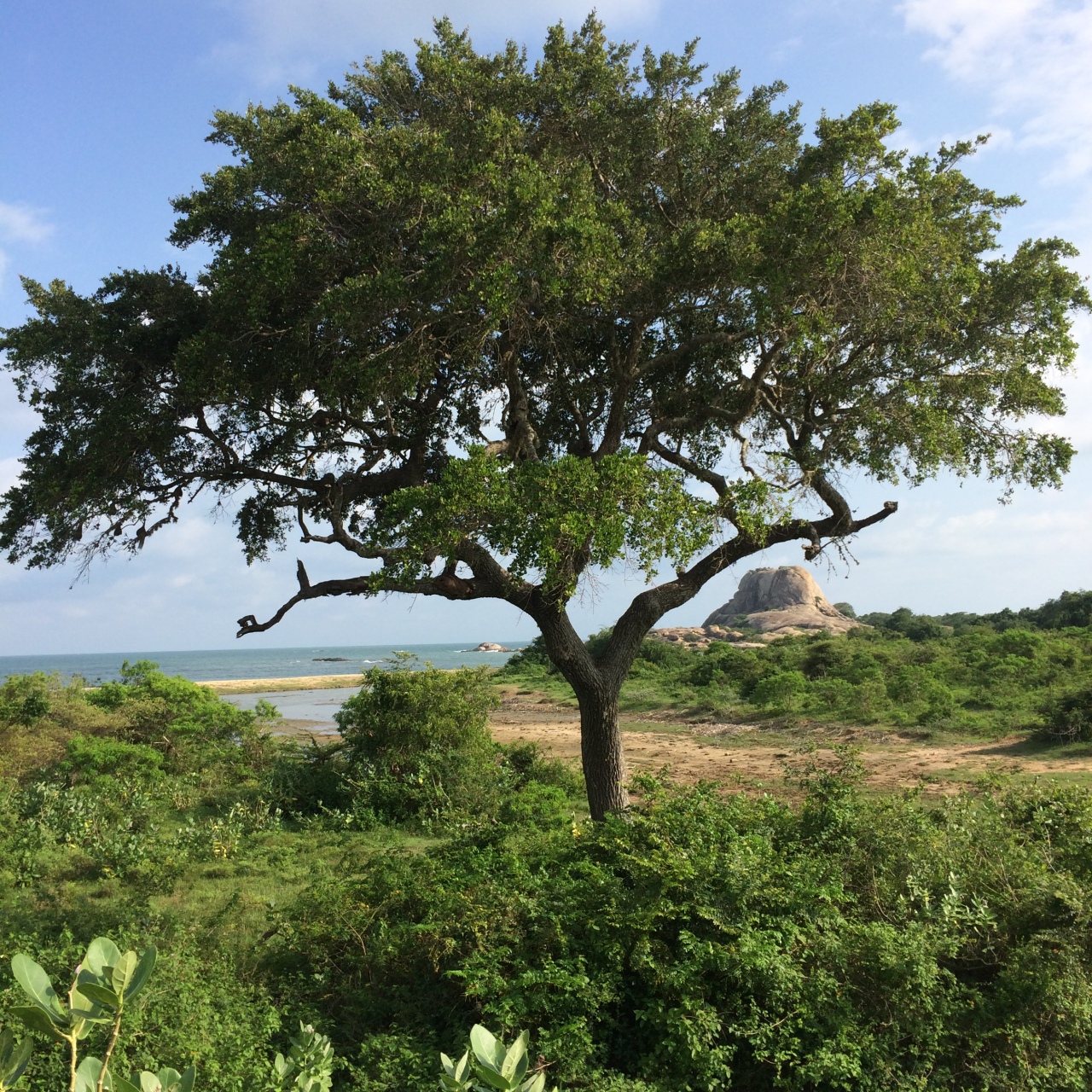 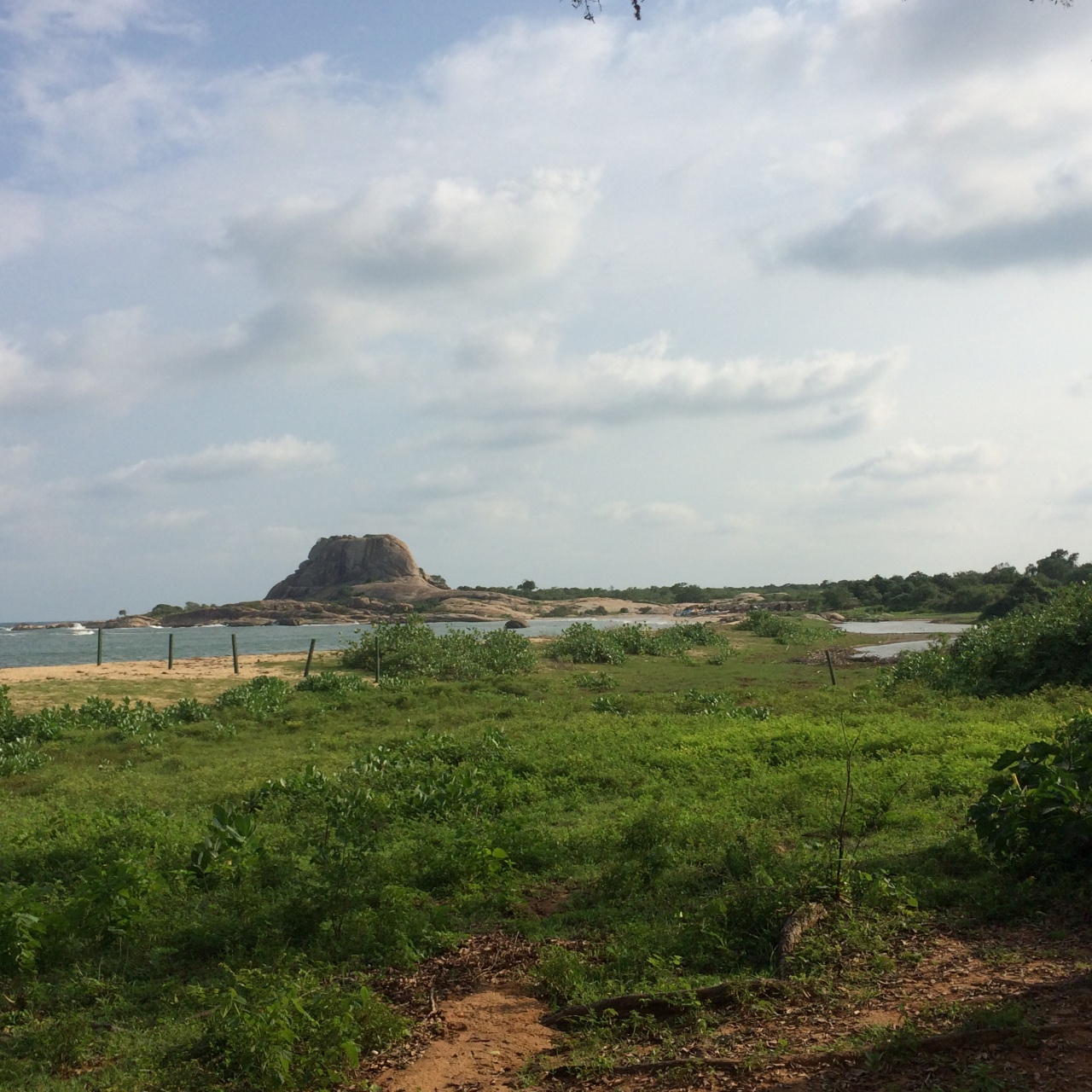 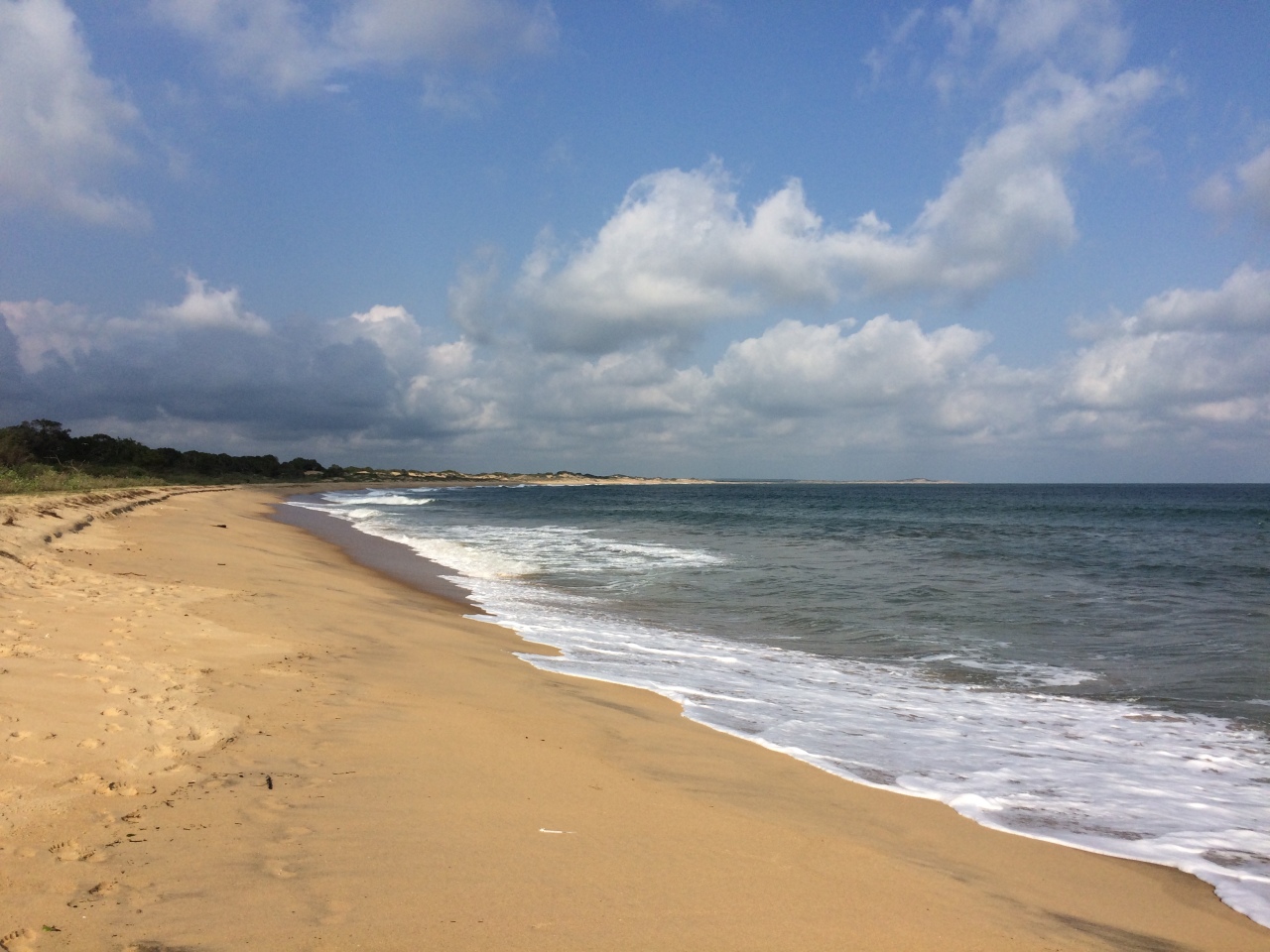 Back on a pathway through the park, the vehicle in front of us frantically radios over – there’s a leopard in the bush beside the pathway. Despite my guide’s frequent assurances that we probably wouldn’t see one, it appeared that today was our lucky day.

We drove slowly, and as silently as possible, up the pathway. Clearly other cars had been told the news – we could hear screeching tires in the distance as all the tourists with long-lens cameras frantically approached. The car in front of us and ourselves were clearly in the best position – directly beside the leopard. We could see him, crouched below a bush, barely visible except for the telltale velvety leopard print against the green.

As luck would have it, something compelled him to wander out from his hiding place. My guide was clearly not faking his reactions (as I thought he might have been for my benefit earlier). A grown leopard wandering out in broad daylight ten feet away from two jeeps was not something he expected either. He whispered excitedly to me “he’s the biggest one I’ve seen!” Well, I’ve never seen one, but he did seem ginormous. My crappy iPhone zoom is not doing him justice.

Eventually we drove on, to give other cars a chance to see the rare animal. My guide was positively gleeful, and the rest of the day felt rather common in comparison. A few peacocks, more bison, some small spotted deer, and a few monkeys rounded out an amazing day in the park. I arrived back at the hotel late, tired, and sweaty (I was always sweaty in Sri Lanka). 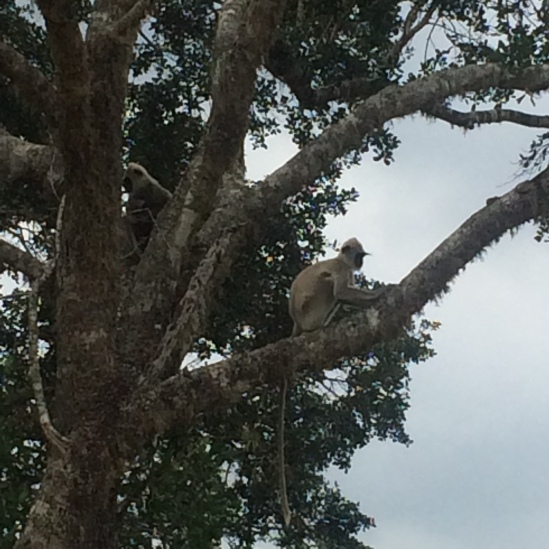 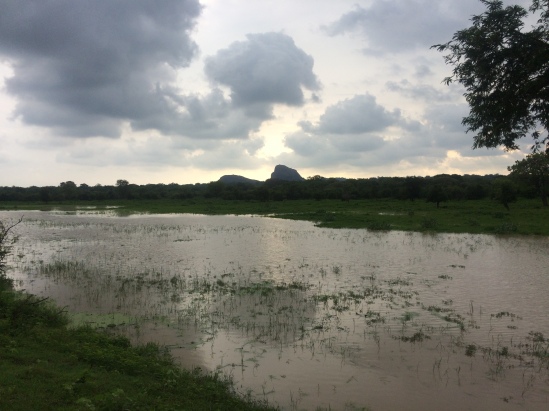 My last morning at the W hotel was spent blissfully soaking up the amazing breakfast and jungle sounds, before sharing another taxi down to the coast and the final destination of the trip. 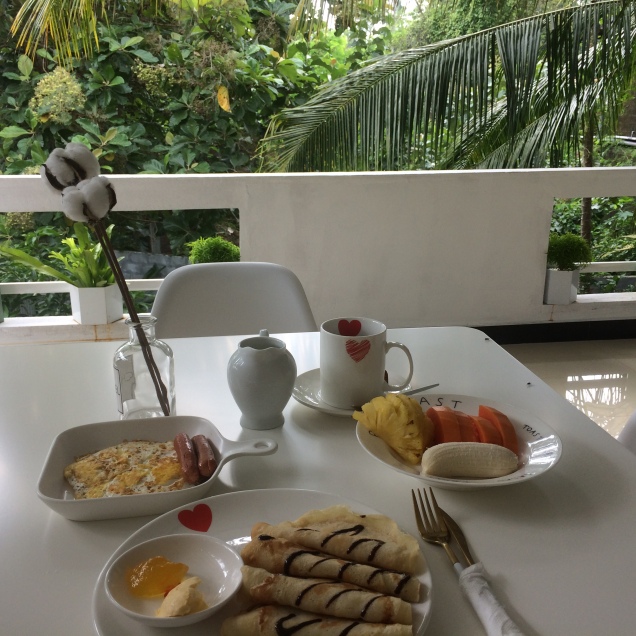